TO CELEBRATE THE CENTENARY OF DIAGHILEV'S FIRST BALLET PERFORMANCES IN PARIS

"In the history of twentieth-century ballet, no company has had so profound and far-reaching an influence as the Ballets Russes." – Lynn Garafola.

Boston, MA – Commencing on the morning of May 19, 2009 – the 100th Anniversary of the first performance of the Diaghilev's Ballets Russes at the Théâtre du Châtelet in Paris – Ballets Russes 2009 will be hosting a three-day symposium to explore the enormous cultural impact of Diaghilev and his Ballets Russes on the world. The symposium, organized by noted dance writer and scholar Lynn Garafola, features an impressive roster of international speakers known for their research and writings on 20th century culture. Part of a weeklong festival in Boston celebrating the centenary of the Ballets Russes, the BR2009 Symposium will be held at Boston University's George Sherman Union.The Ballets Russes (Russian Ballet) was established in 1909 by the Russian impresario Sergei Diaghilev. It became one of the most influential ballet companies of the 20th century, and was renowned for its groundbreaking artistic collaborations among choreographers, composers, artists, and designers.The BR2009 Symposium will explore Diaghilev's impact on artists in the fields of Music, Visual Arts, Dance, and Choreography; examine the process and challenges of Restaging Ballet Russes works; and, finally, unveil new research about "Diaghilev the Man." Diaghilev's relationships with an astounding array of 20th century artists – Igor Stravinsky, Sergei Prokofiev, Natalia Goncharova, Giorgio de Chirico, Enrico Cecchetti, Alexandre Benois, Michel Fokine, Vaslav Nijinsky, Léonide Massine, Bronislava Nijinska, and George Balanchine, among others – will be explored in depth.Presenters include an international roster of more than twenty-five esteemed academics, critics and authors – Joan Acocella, Jack Anderson, John Bowlt, Robert Gottlieb, Millicent Hodson, Andris Liepa, Alastair Macaulay, Nicoletta Misler, Nancy Reynolds, Jane Sharp, Tim Scholl, and Marcia Siegal, among others. John Drummond's 1968 BBC documentary Diaghilev, and Tamara Geva's 1979 film Diaghilev: A Portrait will be screened. Ballets Russes 2009 Director and author Peter Rand; and Associate Director Anna Winestein, a doctoral student at Oxford University and curator of several international exhibitions on the Ballets Russes, will also be making presentations Symposium organizer and Keynote speaker Lynn Garafola is Professor of Dance at Barnard College, Columbia University, and the author of Diaghilev's Ballets Russes.Presentations range from Sarah Woodcock's [former curator of dance at the Victoria and Albert Theatre Collection in London] talk on "Diaghilev's Costumes" to Dutch independent scholar Sjeng Scheijen's groundbreaking research on "The Queer World of Sergei Diaghilev"; and from dance writer Giannandrea Poesio on "Enrico Cecchetti and the Ballets Russes" to Harvard University Professor John E. Malmstad's exploration of Diaghilev's "Russianness."Ballet patrons, students, teachers, aficionados and anyone interested in the evolution of the arts in the 20th Century will not want to miss this fascinating Symposium, part of a weeklong Boston-wide festival running from May 16-23, 2009. The Festival will include a concert by The Boston Pops of music composed for the Ballets Russes, exhibitions at the Wadsworth Athenaeum and Boston University's 808 Gallery, film screenings at the Museum of Fine Arts and Boston University, performances at New England Conservatory, and a special Ballets Russes program by Boston Ballet (The Prodigal Son, Afternoon of a Faun, Le Spectre de la Rose, and a new Sacre du Printemps by Jorma Elo).
Celebrating the 100 anniversary of the Ballet Russes 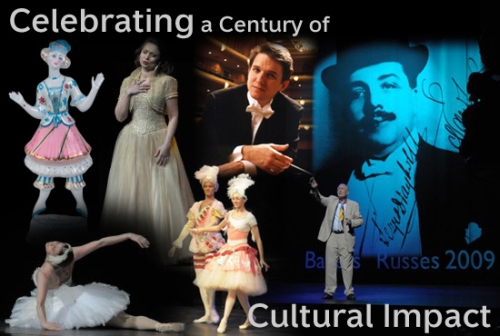 Ballets Russes 2009 is a cultural organization devoted to celebrating the centenary of modern ballet, and to building new audiences for dance and the arts. In an unprecedented collaboration of New England cultural institutions, the Ballets Russes 2009 Festival will feature dance, music, visual art, cinema, poetry, symposia, and other happenings inspired by the genius of Diaghilev's creative team and the extraordinary figure of the impresario himself. The Boston celebration will be linked to programming in Russia and France that will commemorate the revolutionary enterprise known as the Ballets Russes.

"I, personally, can be of no interest to anyone: it is not my life that is interesting, but my work."  Sergei Diaghilev.

For more information and a complete schedule of events visit www.ballets-russes.com