May 19, 2009 marks the 100th anniversary of the legendary ballet company’s first performance in Paris. The HAMBURG BALLET commemorates the anniversary of this ballet history-making company with numerous events.

The Ballets Russes set new standards of esthetics and execution, culminating in the ambition of their impresario Serge Diaghilev to bring together all the arts. Thus, a Gesamtkunstwerk or »total work of art« was born, which had roots reaching far back into Russian tradition, but was cosmopolitan in nature. The departure of the Ballets Russes towards modernism has influenced our understanding of tradition and history to this day.The atmosphere of those days when the Ballets Russes took Paris by storm must have been fantastic. At the reopened Théâtre du Châtelet, extraordinary scenes of enthusiasm played out on the evening of May 19, 1909. The Russian dancers’ breathtaking technique especially impressed the French audience, which was quick to embrace its favorites and celebrate them with abandon. One dancer made a particular splash, casting an almost hypnotic spell with his leaps: Vaslaw Nijinsky. Later, his widow Romola Nijinsky would recount these eventful days from the perspective of her husband, who had become the company’s undisputed star immediately:»From what Vaslav told me later, the instant he began to dance his first variation a murmur went through the public which almost terrified him. The audience burst into an unceasing storm of applause after his first tour en l’air. He sensed the complete abandon of the public in response to his performance. When he leaped off the stage, there were resounding cries for ‘Encore, bis, bis, bis” (…). Then entr’acte was applauded wildly through, without a stop in the bravos. (…) Paris was stupefied and transported. The uproar was terrific; the critics were almost hysterical. They crowded the stage in mad, breathless excitement. But Vaslav did not know of all this, as he was changing in his dressing-room. He took off the necklace which Benois had designed for him, little realizing that he had set a fashion. (…) the great ladies of Paris and London for the next two seasons wore collars of black moiré and diamonds, pearls and brilliant, à l’Armide.«»Le Pavillon d’Armide« was the first of three ballets presented on this historic evening by the Ballets Russes. It featured the sensational »dance event« Nijinsky, who triumphed in the role of the slave. It is no coincidence that John Neumeier’s new creation for this season makes reference to »Le Pavillon d’Armide« as part of a three-part evening of ballet entitled »Hommage aux Ballets Russes«. The examination of the heritage of the early Ballets Russes serves to define his own work, taking him back to the beginnings of an exciting time in the history of ballet which also released an infinite reservoir of creativity and ideas.The premiere, which kicks off the 35th Hamburger Ballett-Tage (Hamburg Ballet Festival), also shows Nijinsky’s »Le Sacre du printemps« (reconstructed by Millicent Hodson) – a choreography that was largely misunderstood in its day, but which marks the beginnings of a modern esthetic of motion. »Hommage aux Ballets Russes« ends with »Prodigal Son«, Balanchine’s last ballet for Diaghilev. It was premiered in 1929, three months before the death of the charismatic impresario, which also meant the end of the Ballets Russes. 1909 to 1929 – twenty years of exciting ballet history, commemorated by a large-scale retrospective.Connecting past and present – this is the motto of this year’s Hamburg Ballet Festival, from the premiere that opens it to its final event, the 35th »Nijinsky-Gala«. Certain motifs also connect the opening and finale of the season itself. As the first revival of the season, the Hamburg Ballet presented further highlights made famous by the legendary company: »Daphnis and Chloë«, »Afternoon of a Faun« and »Le Sacre«, all of them choreographies by John Neumeier, whose creative interest has always been stirred by the artistic heritage of the Ballets Russes: »I am a creative choreographer and at the same time I love tradition – one of my favorite subjects is the Diaghilev era.« For Neumeier, the central figure of the Ballets Russes has been a guiding star from earliest childhood:»Nijinsky was the first dancer about whom I learned more and who became a human being to me,« says John Neumeier. »Of course I never saw him dance, never experienced the arousal of a performance, but there are instances about his life that touched me deeply as I read about his childhood, adulthood and his descent into madness. I learned all this when I was ten. That was the seed – something that grew and became more and more evolved. And, interestingly enough, he never disappointed me, which is rare. Everything that I learned about Nijinsky just made him more familiar and gave me an ever more complete and clear picture. It shows a human being whose motivation I could understand, who became a moral role model in artistic and human terms, and whom I believe I understand.«The Ballets Russes and Vaslaw Nijinsky – a happy constellation for the history of modern ballet. This is the background for celebrating a gala performance of John Neumeier’s »Nijinsky« on May 19, 2009 – a choreographic celebration of the life and work of the »god of dance«, first performed in 2000. The day of the 100th anniversary of the Ballets Russes is also marked by the opening of the exhibit »Dance of Colors. Nijinsky’s Eye and visual Abstraction«. In a unique collaboration with the John Neumeier Foundation, the Hamburg Kunsthalle presents drawings and gouaches by Nijinsky mostly from the Foundation’s holdings and juxtaposes them with a selection of works by the Russian avant-garde. The exhibit emphasizes the importance of Nijinsky and the Ballets Russes for the history of art – through their performances, they renewed the world of ballet, but their influence was felt far beyond. HAMBURG BALLET 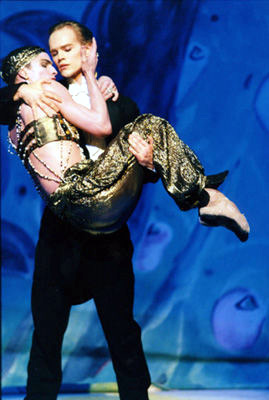