THE EXHIBITION BALLETS RUSSES HAVE BEEN PROLONGED UNTIL APRIL 25, 2010.

Dansmuseet celebrates the centenary with a colourful exhibition of costumes from its world famous collection from this epoch.

Dansmuseet celebrates the centenary with a colourful exhibition of costumes from its world famous collection from this epoch. All the major pictorial artists of its time flocked around the Diaghilev ballet and the exhibition includes costume treasures created by a number of them, Léon Bakst, Alexandre Benois, Natalia Gontcharova, Mikhail Larionov, Henri Matisse, Pablo Picasso… and through them the story will be told how it all started with a season in Paris with Russian dancers on a summer vacation, and grew into an enterprise with Diaghilev at its creative helm which influenced the whole western hemisphere.The Russian Ballet inventiveness in the field of dance, theatre, stage design, music and visual art, inspired and electrified. Every performance in Paris, London, Monte-Carlo, Berlin or Rome, created excitement and rapture and the jetset of that time swarmed around the ballet and its artists. Diaghilev´s stars as Anna Pavlova and Vaslav Nijinsky reached a cult status which can only be compared to the rock icons of our time.

The Russian Ballet created fashion already after its first seasons. Oriental ballets like Schéhérazade inspired fashion houses as well as designers of hotels, restaurants and other public spaces but also of private homes. Ballets Russes became a style and a concept which was marketed to a large and wide audience and which still serves as an inspirational source for the fashion designers of our era like Yves Saint-Laurent and Jean-Paul Gaultier or the British house of Mulberry.
These Russian costumes compose a firework of colour and form which still today has an astonishing freshness, beauty and effect.The exhibition is accompanied by the publication of a new book: BALLETS RUSSES THE STOCKHOLM COLLECTION published by Dansmuseet and Langenskiöld. 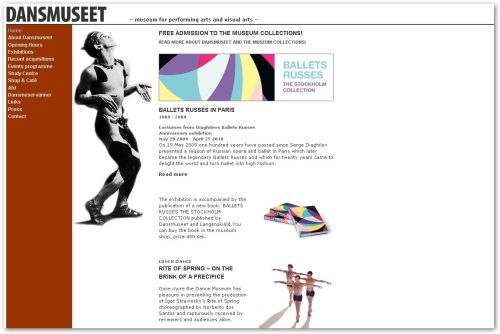