Skillfully written and entertaining documentary that is also a clever investigation into the professional lives of the world’s best dancers, the ballerinas of Russia’s Kirov Ballet.

French filmmaker Bertrand Normand became enchanted with St. Petersburg, Russia during a three-day winter holiday there in 1995. It would be years before he returned and revisited the majestic Mariinsky Theatre, which he felt encapsulated his experience of the city. St. Petersburg inspires superlatives: The Hermitage alone distinguishes it as Russia’s artistic core, but the city’s distinctive architecture, framed by the stately Neva and her canals, makes it one of the most beautiful cultural centers in the world. The Mariinsky, home to the renowned Kirov Ballet and Kirov Orchestra, is St. Petersburg’s musical soul. It is where Normand found his twin subjects for Ballerina—the women who survive that state institution to become its principal dancers, and ballet itself, their art form, which continues to have its apotheosis in Russia.

The film follows three prima ballerinas, Svetlana Zakharova, Ulyana Lopatkina and Diana Vishneva, as well as two new, promising members of the company, Evgenia Obraztsova and Alina Somova. Living the dream of every Russian girl, the dancers are nevertheless products of a Byzantine institution which dehumanizes them while transforming them into cultural idols.  Through brief but memorable scenes, such as the cattle call of nearly naked nine-year-old aspirants to the famed Vaganova Ballet School—the gate through which most ballerinas arrive at the Mariinsky—and the ballet director’s harsh treatment of Somova on the eve of her solo premiere in Swan Lake, Normand illustrates the crucible endured by the very best dancers in the world.

Throughout, Normand remains an attentive observer: He is puzzled but also dazzled by the women in tutus. He intersperses talking heads—Mariinsky director Valery Gergiev, ballet director Makhar Vaziev, ballet masters, and the ballerinas—with montages of archival dance footage, and clips of sublime performances by his subjects. Despite the limitations placed upon him by the dancers themselves, and a year’s delay for permissions from the Mariinsky, Normand lucidly illustrates the institution’s inveterate framework. Ironically, he discovers that the draconian patriarchs rely on female ballet masters, and matriarchs like Altynay Asylmuratova, the artistic director of the Vaganova, to nurture the would-be ballerinas and to protect the freedom and artistic expression of the mature prima ballerinas.

Normand is an excellent storyteller and, on the surface, Ballerina is a cogent, skillfully edited and entertaining documentary. What makes it remarkable is the filmmaker’s unrelenting curiosity about the motivations of these women warriors en pointe who, despite their enslavement, or perhaps because of it, emerge at the pinnacle of their careers—Vishneva being the prime example—as women who know their own minds. Like Obraztsova, who made her cinematic debut in Russian Dolls, they’re also all distinguished by a level of artistry that is both bondage and freedom. In that marriage of opposites which is the ballerina, Normand discovers a metaphor for the imperfect glasnost of contemporary St. Petersburg and of Russia itself. Happily, he never loses sight of his joy and wide-eyed wonder of the Mariinsky’s peerless ballerinas, the women in whom Russia’s emotional soul undoubtedly resides. By Maria Garcia – www.filmjournal.com 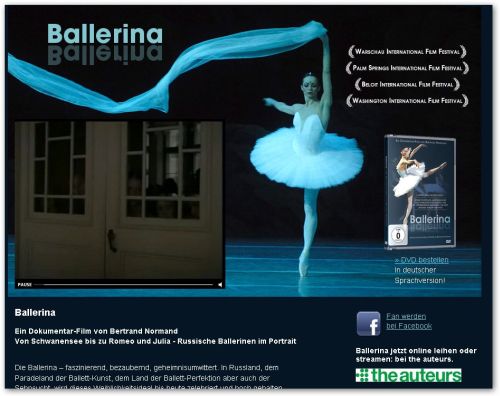