George Zoritch, an international ballet star and former University of Arizona professor, passed away Sunday in Tucson. He was in his early 90s.Zoritch was well-known as many things during his life, including a famous ballet dancer here and in Europe, a teacher, a Hollywood actor and a Broadway dancer.

Zoritch, born in Moscow in 1917, was a student of the legendary Russian ballerina Olga Preobrajenska. He later became an acclaimed dancer, starring with Ballet Russe, a premier European ballet company. Jory Hancock, the director of the UA School of Dance and interim dean of the College of Fine Arts, said life in the Ballet Russe was difficult and that Zoritch wanted more freedom to dance in different roles and to experience Broadway and film.

"The dance scene was more fluid in the U.S., and he was enticed by that," Hancock said about Zoritch.He eventually moved to the United States and began work in in film and on Broadway.Zoritch took up teaching after becoming well-known in America for his performance with Sergei Denham's Ballet Russe de Monte Carlo. After running his own dance school in Los Angeles, he joined the faculty of UA in 1973, where he established a highly respected ballet program. He taught varying levels of dance at the UA for 14 years. Hancock said Zoritch was one of the most extraordinary dancers of his time."There was a period of three decades where he was on top of the world," Hancock said.Jim Clouser, a visiting associate professor of dance at UA, said Zoritch was comparable to Mikhail Baryshnikov. Zoritch retired from the UA in 1987. Hancock said that even after retiring, Zoritch still came to classes at the university.
"He was dressed how we wanted students to dress, in tights," Hancock said. "He had the most beautiful port de bras (movement of the arms)."

Thom Lewis, a student of Zoritch's at the UA, said he was the epitome of a classical ballet dancer. According to Dance magazine, Zoritch worked with nearly every leading lady coming up in the ballet world from 1936 to 1962 and performed works by legendary choreographers, including George Balanchine and Marius Petipa. Zoritch appeared in several films, including "Night and Day" (1946) and "Samson and Delilah" (1949). Zoritch was known by some as harsh, but Lewis said people did not understand his sense of humor and his "old-school approach."He said that Zoritch was honest and direct.Kandis Meinel, another student of Zoritch's, knew Zoritch for 40 years and considered him to be a grandfather figure in her life. She said he could be sarcastic in his criticism, but he really meant it as a way for students to improve. Lewis remembered that if a dancer's feet were not turned out in a position called rear attitude arabesque, Zoritch would tell the dancer she looked like "a doggy at the fire hydrant."Lewis said compliments from Zoritch "meant an awful lot because of his history.""It's a shame he is gone, he was a lovely man," Lewis said. Zoritch dies in 90s; dancer, UA professor – By Matt Lewis – Arizona Daily Star 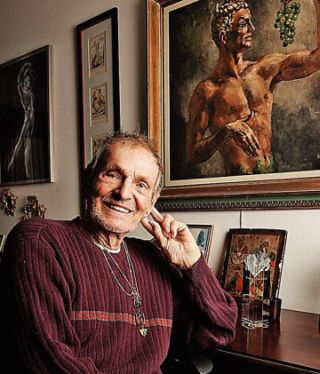