Today marks the 146 anniversary of Richard Strauss, the great German composer. His amazingly lucky creative way lasted about seventy years, a fame came to him early.

A huge amplitude of his musical activities, including the composer's work, conducting, directing music and community organisations, and with all this — excellent health, with a consequent creative indefatigability and longevity.

Starting from the standpoint of neo-romanticism, possessing phenomenal compositional technique, Strauss throughout his long career that inclined to the impressionist, the expressionist influences, but did so without jerks and without "burning the bridges". Confident skill-affected in any manner elected by him, and to some extent off pushed accusations of eclecticism, which in either case would be appropriate. Richard Strauss went into his way during the stormy era: he survived the Franco-Prussian War and two World Wars. But nothing was able to instill in him nationalistic trends, what best can be proven by his long-standing friendship with Romain Rolland and the free choice of repertoire in the dark years of Nazism.Strauss had an amazing gift of musical eloquence that is based on the desire to make listeners involved with his narration of the fate of heroes. And the heroes, whose fate is connected with ancient Greece, ancient Judea, the Middle Ages and the XVIII-th century, once again came alive on the pages of Strauss's music. But no matter what era Strauss was depicting, he always remained primarily a composer of XX-th century. In the list of works by Strauss one can find many great works of chamber genre. But they are only the branch of his legacy, whilst his most creative highways are opera and symphony. Our theatre regularly turns to the operatic and symphonic legacy of Richard Strauss. Over the last years at the Mariinsky Theatre were set opera Salome, Ariadne auf Naxos, Elektra, numerous concerts included performances of symphonic poems Don Juan, Don Quixote, Also sprach Zarathustra, Ein Heldenleben, and well as the An Alpine Symphony, Domestic Symphony, Metamorphosen and so on.Sunday 13 June at the Mariinsky Theatre sees the performance of Richard Strauss’ opera The woman Without a Shadow, which was the first opera premiere this season (in November 2009).

The rich orchestral colours, lush and bright music of Strauss contains the best symphonic and vocal lines the composer had written, explicitly introducing his recognisable style in tune with the spirit of the times in which this great German classic lived and worked.

The production, staged by British director Jonathan Kent (who had earlier staged in our theater the other Richard Strauss’ opera Elektra), was successfully shown in February on a tour within the framework of the project Premieres of the Mariinsky Theatre in Moscow at the National Theatre Festival Golden Mask and will be taken by our theatre in August on tour to Ljubljana. The cast to include Avgust Amonov, Vladimir Vaneyev, Olga Savova, Olga Sergeeva, Mlada Khudoley.Valery Gergiev conducts. 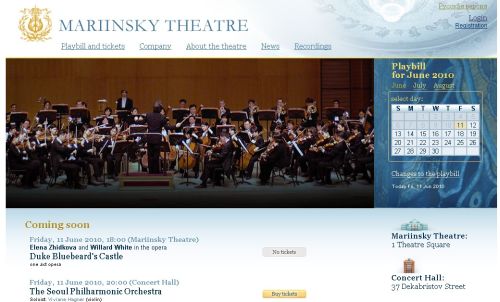