Sylvie Guillem has moved into producing and starring in her own projects – and she doesn't miss classical dance one bit. Sylvie Guillem is unbelievably elegant but she hasn't made the slightest effort.

Debra Craine – From The Times

Sylvie Guillem is unbelievably elegant but she hasn't made the slightest effort. Her face is scrubbed free of make-up, her long auburn hair is tied back with casual aplomb, and she's dressed like a truck driver. Scruffy and natural – is this how ballerinas are supposed to look? Yet there has always been something extraordinary about this glamorous French artist, and no matter how much she downplays it, her innate charisma can't help but assert itself.She may not think so, but Guillem is the nearest thing dance has to a Hollywood star, the one dancer whose phone calls are sure to be answered. These days she also wields the power of an LA producer, organising and starring in her own projects, collaborating with the most innovative talents around. For her latest, Eonnagata, she will be directed by Robert Lepage and dressed by Alexander McQueen – and you can't get more A-list than that. Guillem may have danced her last Juliet three years ago, but her career is even more remarkable now than it was in the days when she reigned over the Royal Ballet.Unlike Darcey Bussell, her long-standing rival at Covent Garden, Guillem is famous only for what she does on stage, not for what she does off. Where Bussell posed for fashion shoots, sold her story to gossip magazines and danced on the telly with French and Saunders, acting as a kind of ambassador for dance in the wider world, Guillem spent her free time working with avant-garde choreographers and pursuing intellectual growth (she is French, after all). Celebrity, it would seem, wasn't part of the plan.
“I would feel embarrassed to be famous,” she says now. “I don't like to be flattered all the time, I don't like to be fawned over. I don't take pride in being recognised in the street. It's not my goal. My goal is to be appreciated for what I do. I am proud of what I give on stage but I wouldn't be proud of making a silly appearance at a party, or being in silly pictures in a magazine, or of having a scandal in my sex life and being recognised for that. It's so banal.”And as for fashion shoots, forget it. “I get asked all the time and I don't do them. I'm not a model, why should I do fashion shoots? Models do it so much better and if you dress me that way I won't look like myself.” Typical, then, that when French Vogue asked her to take part in a photo shoot seven years ago she insisted on doing it in the nude.

Gorgeous in many ways yet dull in others, Eonnagata feels like a work that hasn't yet found its focus —clikc 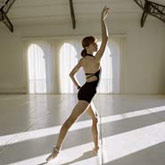 Eonnagata is at Sadler's Wells