The creative collaboration between New York City Ballet and the fashion world continues. Following the jubilee surrounding the Spring Gala 2012, which saw the debut of Two Hearts signed by Rodarte (featuring dancer and choreographer Benjamin Millepied), Peter Martins’ ballet with costumes by Gilles Mendel and J. Mendel and, as if that weren’t enough, a revisitation of Balanchine, whose legendary costumes (created in 1950 by Barbara Karinska) have been completely re-designed by Marc Happel, now comes the turn of the one and only Valentino.

Valentino’s press office has made it known that the Last Emperor is working on costumes for the New York City Ballet Fall opening. For now, there isn’t any further information regarding the costumes, except for a photo of the couturier at work on two tutus. However, there is no doubt as to the quality of the final result, which will surely be distinguished by the maniacal attention to detail and dream-like grace that have always characterized Valentino’s work.

Garavani, born in Voghera in 1932, has just turned 80 and the idea of leaving the scene hasn’t even remotely crossed his mind. After the transition his maison made into the hands of designer couple Maria Grazia Chiuri and Pier Paolo Piccioli, aside from the New York City Ballet project, Valentino has launched a virtual museum-archive, which brings together his work, as well as a retrospective, on the agenda for next fall – in London. vogue.it 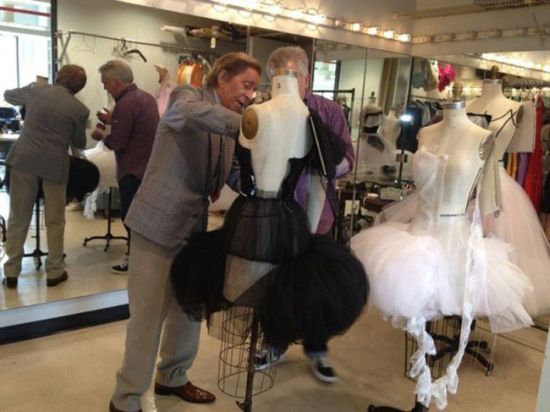 Valentino Garavani is working on the costumes he designed for the New York City Ballet Fall opening.