Young Architects in Spain: A Window to the Unknownis an exhibit featuring a selection of projects by young architects of Spain. The exhibit takes place at Instituto Cervantes New York, 211 E 49th Street, NYC, from September 5-18, 2012.  Gallery hours are as follows: Monday through Friday from 9am to 8.30pm and Saturday from 9am to 2:30pm.

In addition, a symposium will be held from 6:30pm to 8:30pm on Thursday, September 6, 2012 at The Great Hall of The Cooper Union, 7 E. 7th Street, NYC, which will draw together participants from the exhibition as well as young American architects to discuss a new generation of professionals and the future of Spanish architecture. The symposium will include welcome remarks by Juan Ramón Martínez Salazar, General Consul of Spain; and opening remarks by the Spanish architectAlberto Campo Baeza. Participants include Spanish architects María Hurtado de Mendoza from Estudio Entresitio, Héctor Fernández Elorza, and Alberto Peñín from Peñín Arquitectos, as well as Kenneth Frampton, Ware Professor of Architecture, GSAPP-Columbia University; Pablo Lorenzo-Eiroa, Cooper Union; and Urtzi Grau and Cristina Goberna, Fake Industries Architectural Agonism.

The exhibition shows that architectural excellence is found not only in the work of internationally renowned Spanish maestros, but also in the unknown work carried out in the studios of a new generation of professionals, which ensures a promising future for Spanish architecture.

The works were selected by means of a public competition open to all young Spanish architects. The more than 700 projects underwent an individual selection process by the members of an international jury composed of prestigious architects such as Alberto Campo Baeza and Manuel Blanco and the architecture critics Kenneth Frampton and Juhani Pallasma. Sixty-two architecture offices (104 people under the age of 40) were chosen. The exhibition presents a variety of extraordinary works, rigorously constructed and deeply sensitive to their cultural or natural environment.

ABOUT JESÚS MARIA APARICIO GUISADO
Born in Madrid, 1960. Degree in Architecture from the Escuela Técnica Superior de Arquitectura de Madrid (ETSAM), with honors in both Building Design and Urban Design in 1984, where he then taught “Elements of Composition”. Awarded Architecture Scholarship for the Academia de Bellas Artes de España in Rome and Fulbright/ M.E.C Fellowship to be a visiting scholar at Columbia University, New York, where he obtained a Masters in Architecture and Building Design.

Awarded Ayuntamiento de Madrid Architecture and Urbanism Prize, A.P.D. Design Prize, HYSPALIT Prize of Brick Architecture and Special Mention in the European Architecture Award Luigi Cosenza 2000. In June 2000 he represented Spain at the Biennale di Architettura di Venezia. During the academic years 2001-2002, and 2011-2012, he was Visiting Scholar at Columbia University Graduate School of Architecture. He has also curated the exhibitions “Young Architects of Spain” (2007-12), currently touring the world, and “DOMUSae, Spaces for the Culture”. The design project of this exhibition received the International Interior Design Association Award in the USA as well as a Distinction Award from the Madrid College of Architects.

As an architect he has designed and built a residential building, a senior citizens’ facilities centre and a villa, all of them located in Salamanca, Spain. In Madrid he has built the Contemporary Architecture Documentation Centre. In 2004 he was awarded by the Royal Institute of British Architects the ar+d award and selected for the Spanish Architecture Biennale in 2005. He has designed several exhibitions for which he has been awarded several prizes. In 2008 his Horizon House Project was nominated for the Klippan Award. Also in 2008, Aparicio’s professional trajectory was nominated for the Swiss Architectural Award. He is currently designing another two houses in the Castilian and Andalusian countryside.

Both his theoretical research and his built projects have been published national and internationally. He was editor of the Essays on Architecture and Ceramics and chairman in Ceramics in Madrid. He was the director of the conference “Crisis in Architecture?” which took place in Brussels in 2010. Among his published works are: El Muro, El Hogar del Jubilado, Terragni, la densidad en el espacio, El Danteum, Construir con la razón y los sentidos and Jesús Aparicio AA40.

ABOUT JESÚS DONAIRE
Born in Ciudad Real, 1974. Degree in Architecture from the Escuela Técnica Superior de Arquitectura de Madrid (ETSAM) in 2000. Fulbright Fellow 2007-2009. He was Visiting Scholar at the Graduate School of Architecture, Planning and Preservation (GSAPP) Columbia University, New York, where he obtained a Masters in Advanced Architecture Design with an Honor Award for excellence in design and a William Kinne Fellows Travelling Award in 2008.

Madrid Architects’ Association ‘Fundamentos’ Design Award in 2009. Awarded Madrid Polytechnic University Social Board Scholarship 2010. Ph.D. candidate under the tutorship of Ware Professor Kenneth Frampton (GSAPP) and Jesús Aparicio (ETSAM). Since 2009 he has been Associate Professor of Architecture at the ETSAM. He has been Assistant Professor of Architecture at the Barnard + Columbia College of Architecture in New York and lecturer/jury member in various institutions, including the GSAPP, the NYIT, and the Pratt Institute in New York, the KTH School of Architecture in Stockholm, the Spanish Academy in Rome, the Francisco de Vitoria University in Madrid, and the Matadero Madrid Contemporary Art Center.

He is associate curator and architect designer of the ‘Young Architects of Spain’ exhibition. Also curator and designer of the Spanish Cultural Buildings retrospective ‘DOMUSae, Spaces for Culture’. The design project of this exhibition received the International Interior Design Association Award 2012 in the USA as well as a Distinction Award from the Madrid College of Architects. He was director of the ‘Crisis in Architecture?’ conference held in Brussels in 2010 and the ‘Architettura e Resistenza’ conference held in Rome in 2011.

As an architect he has designed and built a single house in Cáceres, several exhibition designs and has won two “mention” awards in national competitions. He has also worked as an art curator. For several years he collaborated with architects Jesús Aparicio and Alberto Campo in Madrid and David Chipperfield in London. He is currently designing a single house. His theoretical investigations and built projects have been published nationally and internationally.

ABOUT ALBERTO PENIN LLOBELL
Architect from ETSA-Valencia since 1995. European PhD since 2007 with the thesis “The transformation of the project during the building process. Sydney Opera House and Centre Pompidou”.

He teaches Degree and master at Barcelona Architecture School since 1999 and in seminars, workshops, finale diploma jurys or masters, and other schools in Spain, Trieste, Venice or Paris. He has also lectured in seminars and professional associations in Spain, Berlin, Milan, Stockholm, Monterrey or Sydney. Co-founder of Peñín Architects since 1995, in Valencia and Barcelona, with special attention to the urban and territorial design and public buildings. AXA Association member since 2011.

Carlos Ferrater’s regular partner since 1997 in many works and projects. He also has collaborated with architectural offices in France and Holland. Finalist for the Foredeck building for the America’s Cup (2005) and first prizes in housing competitions at Toulouse, for the City of Languages at Castellon (2010), for the city hall of Alcudia (2007), for a school (CIEGSA, 2005) and for those already built, Vila-real library (2009), IMSERSO medical center (2003) and the Vila Carlet Square (1997).

Also built an office building (Boulogne 2010), a hospital for adults (Burjassot, 2009), the campus university of Gandía (2000-2010) and several houses. In multi-family housing highlights the new urban doors of Torrent or Castellón, both based on social housing (2010-11). He is author of several rehabilitation and interior design projects, as CHJ, at a listed modernistic building, or the Bullfight arena of Valencia.

His work has been selected in several exhibitions or awards at the Union of Architects, the XI Biennal of Spanish Architecture and Urbanism, or the Young Architects exhibition in Spain (YAS).

He has been Visiting Professor and Lecturer at many international schools of architecture. Among his works that he has projected and built as a practicing architect: the “Architectural Documentation Centre in Madrid” was awarded: First Prize in the AR+D PRIZE from the British Architecture Association, RIBA, Finalist in the ENOR PRIZE 2005, Finalist in the COSENZA PRIZE 2005, First Prize in SALONI PRIZE 2005 and Finalist in BIENAL DE ARQUITECTURA ESPAÑOLA 2005. His work Chemical Laboratory Building in Alcala University was awarded First Prize in the ATEG-PRIZE 2010 and Second Prize in the BIGMAT PRIZE 2011. Ding 2009 and 2010 he has been awarded the ROMA PRIZE in the Spanish Academy in Rome.

María and César, with 14 years of teaching experience, teach on regular basis a design studio at Madrid’s School of Architecture (ETSAM, Polytechnic University of Madrid). They have been invited to lecture and critic at several Spanish and European Schools and Maria was visiting critic at Cornell University AAP the fall semester of 2011.

María and José María were both granted with a Rome’s Prize in the Spanish Academy of Rome. César received a Master of “Advanced Architectural Design” at Columbia University, New York, granted by the Fulbright fellowship.

They have won several competitions that allowed them to build a number of projects during the decade 2000-2010, amongst which health care centers and social housing dwellings are the main topics. (www.entresitio.com)

Their work has been published in many journals around the world including AV, Bauvelt, Detail, Mark Magazine, Space, AIT, Speech, The Plan, etc. being selected as “Design Vanguard” by the Architectural Record magazine in 2007. It has also been shown in several international exhibitions such as the Venice Biennale in 2000, 2006 and 2008, Spanish Bienales of 2009 and 2011, Iberoamerican Bienales of 2006 and 2010, Young Architects of Spain (JAE/YAS) featured extensively around Europe and the US, EMVS public housing (RIBA, London 2007- AEDES, Berlin 2007- Turin 2008) and the Expo Shanghai 2010. 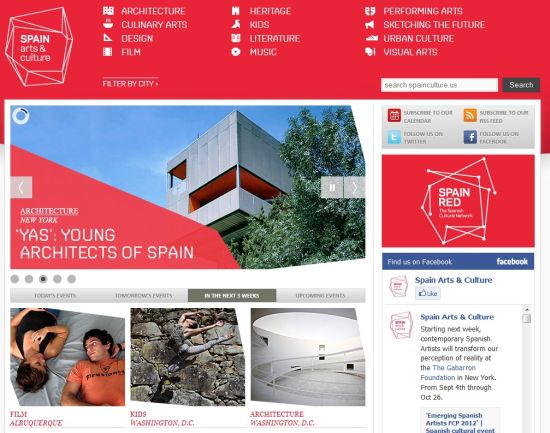