The Board of the Fondation en faveur de l'Art chorégraphique is delighted to announce the appointment of Amanda Bennett as Artistic Director of the Prix de Lausanne from January 1, 2012. Amanda Bennett is currently the Principal of the Ballettschule Theater Basel, a position that she will continue to hold, dividing her time between Lausanne and Basle.

Amanda Bennett was trained at the School of American Ballet in New York. She performed with Pennsylvania Ballet, the Ballet du Grand Theatre in Geneva under the direction of Patricia Neary and the artistic direction of George Balanchine and was a principal dancer of the Basler Ballet under the direction of Heinz Spoerli. She has worked as guest teacher and ballet mistress for numerous companies such as Ballett Basel and Ballet Freiburg Pretty Ugly. Since the beginning of her career as a teacher, she has continually worked in close collaboration with physical therapists to develop programs promoting the efficient and healthy training of dancers.

Ms. Bennett was on the jury of the McDonalds Performing Arts Challenge and was honored to serve as a member of the Jury of the Prix de Lausanne in 2009. She has been the Principal of the Ballettschule Theater Basel since 2001.

On the occasion of its 40th anniversary, the Prix de Lausanne is happy to announce the names of the two choreographers who have generously accepted our invitation to provide candidates at the 2012 Prix de Lausanne competition with their contemporary variations.

The two choreographers, both young but already well known internationally, are Cathy Marston and Didy Veldman.

Every candidate will receive an official DVD from which he/she will be able to select one of the variations for presentation in Lausanne.

During coaching sessions, each candidate selected to come to Lausanne will receive advice from the choreographer or her assistant on how best to perform the variation and interpret the choreography. The opportunity to immerse themselves in the process of rehearsing is one of the distinctive features of the Prix de Lausanne and extremely rewarding for the candidates.

Cathy Marston and Didy Veldman's styles will no doubt expand the candidates' vocabulary and the Prix's Artistic Committee is very grateful to them both.

Registration for the Prix de Lausanne 2012 is open until September 30, 2011: www.prixdelausanne.org

Information and registration for the Prix de Lausanne 2012. 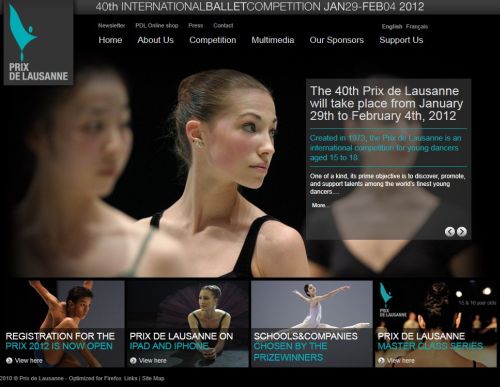