The Conference Committee will be chaired by Jane Pritchard, Curator of Dance, Theatre and Performance Collections at the V&A Museum.

This significant and wide-reaching event will be held over the first weekend of April, 2011; opening at the Royal Opera House, Clore Studio Upstairs on Friday 1 April (from 3pm); continuing at the Upper School, Floral Street, Covent Garden on 2 April, and concluding on 3 April at the Lower School, White Lodge, Richmond Park.

The aim of the Conference is to facilitate a rigorous and multi-disciplinary exploration of de Valois’ life and legacy, while promoting a productive exchange between dance practitioners, academics, social historians and cultural commentators, within the context of ballet and the wider theatre. 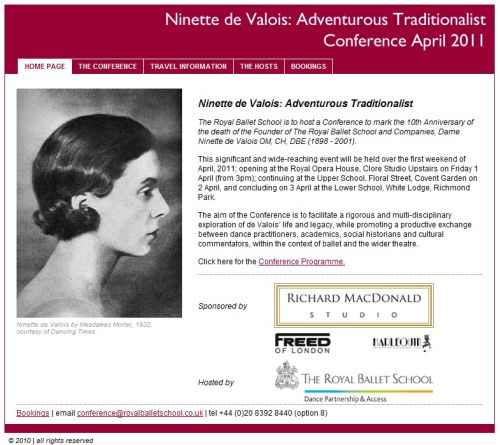