On May 17, 2016 at the Bolshoi Theatre in Moscow Amatriain received her third award this season: the International Dance Union awarded her with the renowned Prix Benois de la Danse in the category “Female Dancer”.

Stuttgart Ballet Principal Dancer Alicia Amatriain has received three prestigious awards in one season, on the local, national and international level:  In September 2015 she was named “Kammertänzerin” by the State of Baden Württemberg,  the highest status a dancer can achieve in Germany and a title rarely bestowed.   In November 2015 she won the national German Theatre Prize Der Faust as outstanding  female dancer – for her role in Demis Volpi’s The Soldier’s Tale . On May 17, 2016 at the Bolshoi Theatre in Moscow Amatriain received her third award this  season: the International Dance Union awarded her with the renowned Prix Benois de la  Danse in the category “Female Dancer”.

She received the prize together with Paris Opera Ballet Principal Dancer Hannah O’Neill.  With this nomination, the international jury of highly regarded dance professionals honors Alicia Amatriain’soutstanding performance as the Devil; a role Demis Volpi created for her in his ballet The Soldier’s Tale as well as for the role of Blanche DuBois in John Neumeier’s.

With the Prix Benois de la Danse Alicia Amatriain’s work and performance as a dancer has now been honored also internationally, an unprecedented hattrick.

Alicia Amatriain was born in San Sebastian, Spain, where she received her first ballet training. She subsequently attended the John Cranko School in Stuttgart from which she  graduated in 1998. She joined the Stuttgart Ballet as an apprentice and was taken into the Stuttgart Ballet’s Corps de ballet in 1999. In 2002 she was promoted to Principal Dancer.   Her repertoire includes the leading roles in John Cranko’s Ballets such as Odette/Odile in  Swan Lake , Juliet in Romeo and Juliet , Tatiana in Onegin and Katharina in The Taming of the  Shrew as well as a wide range of leading roles in full-length ballets such as the title roles in  Giselle (after Coralli, Perrot, Petipa), La Sylphide (Peter Schaufuss after August Bournonville) and  The Sleeping Beauty (Marcia Haydée after Petipa), Kitri in Don Quijote (Maximiliano Guerra after Petipa), Marguerite in The Lady of the Camellias and Blanche DuBois in A Street car Name Desire (both John Neumeier). In addition, she dances works by, a.o., George Balanchine, Jerome Robbins, Glen Tetley, Maurice Béjart, Kenneth MacMillan, William Forsythe and Hans van Manen.

Christian Spuck created the leading role in his ballet Lulu especially for her. 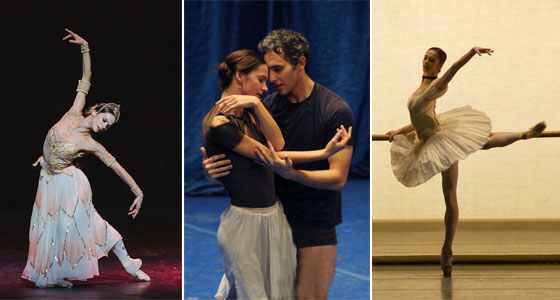 In the 2013/14 season, star ballerina Polina Semionova will once more appear as a guest dancer with the Bavarian State Ballet. She already worked with Mr. Neumeier and the company during the intensive rehearsal period for the première of A Midsummer Night’s Dream in Munich. Alongside Matej Urban as Theseus/Oberon Polina Semionova will make her … Leer más