In his latest project, Flip book, the French choreographer Boris Charmatz is using the work of Merce Cunningham, the great American master of postmodern dance. The starting point for this piece is David Vaughn’s book Merce Cunningham: Fifty Years, containing photos and drawings of all his creations and portraits of him and his dancers too.

Charmatz: ‘All these pictures together represent almost his entire oeuvre, but also form a piece of choreography in themselves, in a way that is very similar to the method Cunningham uses in his creative process: dance is to be found between two poses or positions. I think it must be possible to create a piece that starts from this sequence of images, performed from beginning to end.’

In this way, Flip book is ‘the story of a life’s work captured in a book which in its turn is transformed into a performance by a handful of dancers’.

Interview with Boris Charmatz in De Morgen
‘I was fascinated by Merce Cunningham: Fifty Years, a photo book David Vaughn made about the work of this recently deceased choreographer and dancer. He captured virtually every one of Cunningham’s productions in photos. This book is a selection from those archives. If you leaf through it quickly, it’s almost a performance in itself. That’s where the basis for this piece came from: I gave a group of dancers the task of creating a choreographic piece, in a very short time, that combined the various photographic images into a single, flowing movement. The music is completely independent of the dance, as it was in Cunningham’s work.’
‘Cunningham’s method consists of fixing positions and bodily attitudes in advance. The choreography itself arises out of the way the dancers link these positions together. This principle is related to classical ballet. It nevertheless also gives the dancers tremendous freedom. This is because Cunningham let them decide for themselves how to make the transitions. Most contemporary choreographers do not offer the possibility of choice: they fix the whole of a sequence of movements.’

‘I make use of this unusual element in Cunningham’s work. In Vienna, for example, we put the whole performance together in just ten days. The dancers had to learn 300 photos by heart. So they had no time to think. They put everything into devising transitions. That released a lot of creative energy. The same thing occurred when I worked with amateurs. They were not brilliant technically, but they did come up with some surprising solutions. In Kortrijk I gathered some real stage creatures around me: professional dancers who are able to really let themselves go on stage. It was all about speed and transformation.’
(Pieter T’Jonck, 19/11/09)

Merce Cunningham (1919‐2009)
Most dance historians consider the American choreographer Merce Cunningham to have been the father of postmodern dance. The nineteen‐fifties in particular witnessed a turning point in the history of modern expressionist dance, since that is when the first ‘happenings’ took place. More specifically, 1952 is seen as the start of a revolution because it was then that the first of these artistic events was organised. A variety of artistic people were involved, including Cunningham himself, the composer John Cage (who from then on was Cunningham’s permanent musical director and assistant) and the artist Robert Rauschenberg. From that time onward (until the sixties), ‘happenings’ were popular with the most progressive representatives of a whole range of art forms because they swept aside several artistic taboos. These happenings clearly went against the artistic concepts of the time and consisted of a succession of events with no beginning or end. In most cases, the events themselves also lacked any content or meaning: one might, for example, see an artist ironing clothes for fifteen minutes or cycling around the stage on a child’s tricycle. These happenings could be described as absurdist or Dadaist, and they pulled to pieces all the sacred cows of the artistic world, often in a satirical tone. They moved away from the principles and traditions which in the meantime had established themselves in (expressionist) modern dance. They thereby cleared the way for new forms – under the collective name of postmodern dance – which were no longer occupied with psychological human portrayals, symbolism or even meaningful content. Postmodern dance also abandoned general prescriptive rules on dance technique and the form of dance compositions.

The artistic credo that originally bound the representatives of this postmodern dance together involves the principle that any approach may be considered fruitful. This view corresponds with Cunningham’s original artistic credo, which can be described as a sort of anarchist manifesto. I have summarised this credo in the seven following points: (1) Any movement can be used as a step or theme in dance. This also applies, for example, to very ordinary, everyday movements such as walking, running, skipping, crawling, etc. (2) Any procedure can be used as a method of choreographic composition. The use of chance has become especially familiar to us. Cunningham learnt this from the composer John Cage. In this method, all sorts of decisions about particular moments in a dance performance are taken on the basis of chance outcomes, for example by throwing dice or tossing a coin. (3) Every part of the body can be used in dance. This is particularly striking in isolated movements of specific parts of the body, such as shaking the head, shrugging the shoulders and swinging the lower arm or leg. (4) The choreography, music, costumes, set and lighting are separate components of a dance piece, and may possibly function entirely independently of one another. (5) Each dancer may perform as a soloist. One of Cunningham’s characteristics is that he often had several dancers perform different dance themes simultaneously. It is then impossible for the spectator to watch everything at the same time and he is therefore forced to ‘choose’ one or more soloists for himself.

(6) Any space can be used as a ‘theatre’ or dance space. For example, Cunningham was one of the first to perform in a museum. (7) Dance can be about anything, but in the first place and in principle it is about the human body and its potential for movement. 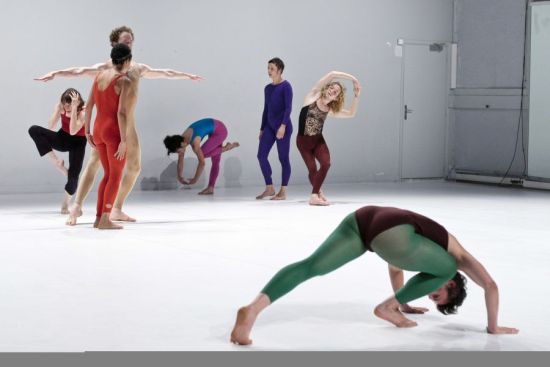 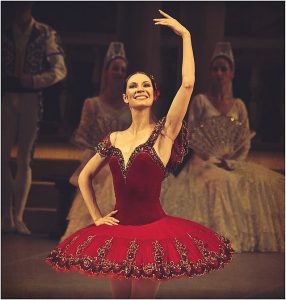