For the first time In Russia, at the Diana Vishneva Gala Performance, a Martha Graham piece will be performed. On June 23 at the Mariinsky Theatre, Diana Vishneva and Martha Graham Dance Company member Benjamin Robert Schultz will perform the Graham classic masterpiece Errand into the Maze.

The ballet Errand into the Maze (Music by Gian Carlo Menotti; Sets by Isamu Noguchi Costumes; by Edythe Gilfond; Lighting by Jean Rosenthal) was created by Martha Graham in 1947. Like several other of her productions, this ballet was based on an ancient Greek myth. She created a total of thirteen such ballets (which are often referred to as the “Greek cycle”, although Graham herself preferred to call them “pieces”). The ballet Errand into the Maze is a free interpretation of the story of Ariadne and the Minotaur’s labyrinth. Such great ballet stars of as Makarova, Baryshnikov and Nureyev have performed with Martha Graham’s company and in her ballets.

Diana Vishneva is the acclaimed award-winning prima ballerina with both the Mariinsky Theatre (formerly the Kirov Ballet) in Russia and American Ballet Theatre. Born in St. Petersburg, she was trained at the Vaganova Choreographic Institute and upon her graduation in 1995, joined the company of the Mariinsky Theatre. She was promoted to the level of principal dancer a year later. While at the Vaganova school, she scored the highest scores known to the school's history. Her repertoire with the Mariinsky company includes the title roles in Giselle and Manon, as well as leads in the classics: Don Quixote, Romeo and Juliet, The Sleeping Beauty, Raymonda, Le Corsaire, The Nutcracker, La Bayadère. She also performs the works of modern choreographers, especially those of George Balanchine, William Forsythe and Roland Petit. She has enjoyed critical acclaim for her interpretation of Rubies, (the second movement of Balanchine's evening-length, ballet, Jewels), in the third movement in Symphony in C, Apollo, Tchaikovsky Pas de Deux and Grand Pas Classique, among others. Some of her prizes and awards include the 1994 International Ballet Competition in Lausanne, Benois de la Dance prize, the St. Petersburg theatrical prize Golden Sophit, the BALTIKA prize, the highest theatrical prize of Russia Golden Mask and was named Best in Europe by Dance Europe magazine in 2002. Her partners have included such well-known dancers as Angel Corella, Manuel Legris and Vladimir Malakhov. In addition to dancing with the Kirov Ballet, Vishneva has made guest appearances with many ballet companies, including not only American Ballet Theatre, but also the Bolshoi Ballet and the Paris Opera Ballet to name a few.

The Martha Graham Dance Company (Janet Eilber, Artistic Director; LaRue Allen, Executive Director ) has been a leader in the development of contemporary dance since its founding in 1926. Informed by the expansive vision of pioneering choreographer Martha Graham, the Company brings to life a timeless and uniquely American style of dance that has influenced generations of artists and continues to captivate audiences. Graham and her Company have expanded contemporary dance’s vocabulary of movement and forever altered the scope of the art form by rooting works in contemporary social, political, psychological, and sexual contexts, deepening their impact and resonance.

The Martha Graham Dance Company has been an unparalleled resource in nurturing many of the leading choreographers and dancers of the 20th and 21st centuries, including Merce Cunningham, Erick Hawkins, Pearl Lang, Pascal Rioult, and Paul Taylor. Graham’s repertoire of 181 works has also engaged noted performers such as Mikhail Baryshnikov, Claire Bloom, Margot Fonteyn, Liza Minnelli, Rudolf Nureyev, Maya Plisetskaya, and Kathleen Turner. Her groundbreaking techniques and unmistakable style have earned the Company acclaim from audiences in more than 50 countries throughout North and South America, Europe, Africa, Asia, and the Middle East.

Today, the Company continues to foster Graham’s spirit of ingenuity. It is embracing a new programming vision that showcases masterpieces by Graham, her contemporaries, and their successors alongside newly commissioned works by contemporary artists inspired by Graham’s legacy. With programs that unite the work of choreographers across time within a rich historical and thematic narrative, the Company is actively working to create new platforms for contemporary dance and multiple points of access for audiences. 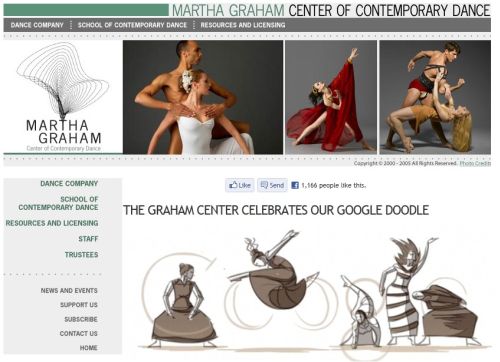