The Making of Markova. A biography by Tina Sutton

Though I can’t dance a step, I did share one thing with Alicia Markova: a lifelong love of art and art history. So when researching her biography, I relished exploring Markova’s numerous personal relationships with many of the most cutting-edge modernists of her day. She developed an especially close bond and friendship with the Russian painter Marc Chagall, whom Time magazine art critic Robert Hughes called “the quintessential Jewish artist of the 20th century.”

Markova and Chagall shared not only a religion – both Jews in vehemently anti-Semitic times – but also an immense joy in their art, evidence of which is now on display in the Dallas Museum of Art’s irresistible show: Chagall: Beyond Color. For the first time since the 1940s, Chagall’s glorious sets and costumes from the ballet “Aleko” – choreographed by Léonide Massine and starring Alicia Markova – are on public view in the United States.

When the ballet premiered in Mexico City in 1942, Chagall’s ebullient designs were so bold and original that celebrated artists Diego Rivera, Frida Kahlo and José Orozco gave him a standing ovation on opening night. (The ballet received 19 curtain calls, with Chagall invited up on stage to take his well-deserved bow with the dancers.)

How did Marc Chagall wind up in Mexico? Forced to flee Paris with his family due to Nazi persecution during World War II, the renowned painter moved to New York when propitiously invited by the city’s acclaimed Museum of Modern Art. It was there, while working for Ballet Theatre (now the American Ballet Theatre), that fellow Russian Léonide Massine asked Chagall to collaborate with him on “Aleko” – a tragic tale of passionate love and betrayal based on a poem by another famous Russian, Alexander Pushkin. Fortunately that creative process took place during a spring/summer performance booking in Mexico City, because the New York stage painters union would not have permitted Chagall to do anything but “direct” the design process if they had been working in Manhattan.

That would have been a tremendous loss, as you can see here in photos of several extraordinary Aleko pieces in the Dallas show. Chagall’s four hand-painted backdrops (30 by 48 feet each!) boasted his signature folkloric symbolism, spontaneity of brushstroke, and remarkable eye for intense, expressive color. The artist also hand-painted the wildly inventive costumes, almost 70 in all, each with its own distinct flavor of delicious colorations and whimsical design.

Markova spent much time working and socializing with Chagall and his beloved wife Bella during the entire creative process for Aleko. The trio would shop the city’s marketplace together, gathering inspiration from the intense local colors as they scooped up vibrantly dyed fabrics and intricate decorative trims. Bella, an excellent seamstress, would then stitch the various materials together under her husband’s direction as he experimented with fanciful layering. Markova also contributed, making exotic armlets and necklaces for her costumes from decorative Mexican gold coins.

As the firey gypsy temptress Zemphira, Markova had numerous costume changes, one more exotic than the next, and all covered in layered nettings, fabric flourishes and colorful appliqués. Chagall hand-painted each garment while Markova modeled it, so he could achieve the perfect placement for his symbolic design details.

Best known as an exquisitely refined and ethereal classical ballerina – the quintessential Giselle – Markova was a revelation to critics and audiences alike as the perfect embodiment of a “priestess of evil,” as one critic remarked. Chagall’s costumes went a long way in helping Markova create that acclaimed performance, as dance critic Grace Roberts described:

«With sunburnt make-up, wild hair, and a vivid red costume, her very appearance was a shock, though a delightful one. Nothing was left of the familiar Markova but the thistledown lightness, and authoritative dancing style, now turned to the uses of demi-caractère.»

On the bodice of Markova’s first costume (photo at left), Chagall painted a small red heart just below the ballerina’s own, with a tree of life beneath it to illustrate the initial hopefulness of passionate love.

Ever after, Chagall signed all his correspondences to Markova with his name inside a heart – not as a token of romantic love – but as a reminder of their happy times working together. The pair would reunite in 1945 for the The Firebird ballet with music by Igor Stravinsky, once again with Markova dancing the lead role.

As in the study above for The Firebird ballet curtain (also in the Chagall: Beyond Color show in Dallas) the artist whimsically melds the spirit of Markova and the titled bird, both capable of effortless flight. In addition to creating a breathtaking costume for Markova with large beak and real bird-of-paradise plumes, Chagall developed a special body make-up for his fine feathered friend. First a dark brown body-wash was applied to Markova’s shoulders, arms, and back, followed by patches of grease. Gold-dust was then sprinkled all over her (or thrown at her, as she liked to say) sticking to any oily surfaces. While dancing the role, Markova’s body glistened like a bird’s feathers in the sun.

Though a magical effect, it took hours in a hot tub to soak off, forcing Markova to leave the theatre many an evening still covered in itchy gold dust. But she said it was always worth it, and she and Chagall remained great friends for life. themakingofmarkova.com 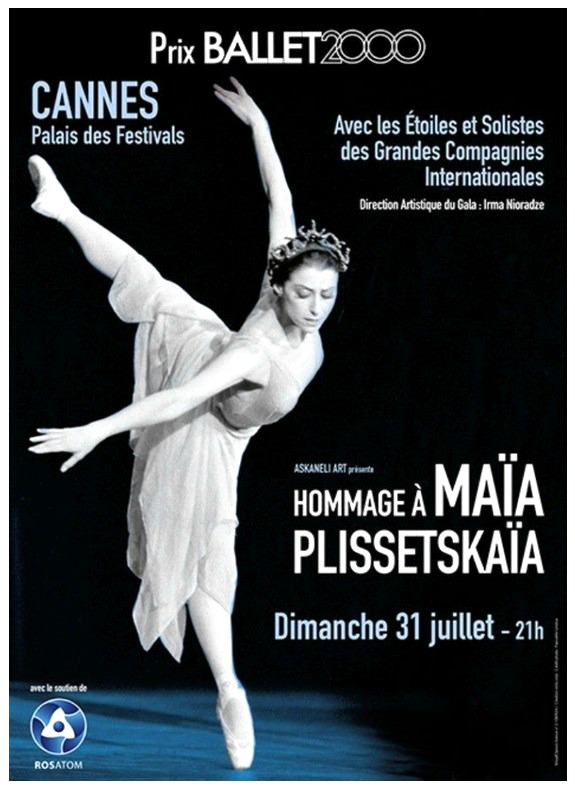