City Center will celebrate the 20th season of its acclaimed Tony Award-winning Encores! series on November 12 with a Gala benefit starring Raúl Esparza and Kelli O’Hara. The Encores! Anniversary Season will open on January 30, 2013, with Fiorello!, the show that launched the series in 1994, and will continue with It’s a Bird…It’s a Plane…It’s Superman, followed by On Your Toes.

Last season’s acclaimed production of Duke Ellington’s Cotton Club Parade will return for a limited, sevenperformance run, November 14–18. Cotton Club Parade, conceived by Jack Viertel, will once again be directed and choreographed by Warren Carlyle, with music direction by Jazz at Lincoln Center Artistic Director Wynton Marsalis. The show will feature the Jazz at Lincoln Center All Stars under the direction of Daryl Waters.

OPEN HOUSE NEW YORK
October 7, 2012 Reservations begin September 27 City Center’s recent award-winning renovation by Ennead Architects has preserved the essential character of the landmark building while reinvigorating one of the City’s most venerable performing arts venues. The renovation of City Center, which was constructed as a Shriners Temple in 1923, retains the distinctive appeal of the original neo-Moorish design. As part of 10th Annual Open House New York Weekend, Architects from Ennead will be leading tours of the building on Sunday, October 7, hourly from noon–4 p.m. Tours are free and limited to 30 people. Advance reservations are required. Reservations can be made online at www.OHNY.org

AMERICAN BALLET THEATRE
October 16 – 20, 2012 Tickets on Sale July 23
American Ballet Theatre’s 2012 Fall season at City Center opens with a Gala benefit and continues with a world premiere by Artist in Residence Alexei Ratmansky, a celebration of the 70th Anniversary of Agnes de Mille’s Rodeo, a revival of José Limón’s The Moor’s Pavane and performances of Mark Morris’ Drink to Me Only With Thine Eyes, Twyla Tharp’s In the Upper Room and Antony Tudor’s The Leaves Are Fading. Principal Dancers for the City Center engagement include Roberto Bolle, Herman Cornejo, Marcelo Gomes, Julie Kent, Veronika Part, Xiomara Reyes, Polina Semionova and Cory Stearns. www.abt.org

Rolex presents
A DANCE VARIETY SPECTACULAR CAREER TRANSITION FOR DANCERS
November 5, 2012 Tickets on Sale Now Liza Minnelli, one of the entertainment world’s most beloved performers, will be honored with the 2012 ROLEX Dance Award. Hosted by Angela Lansbury, five-time Tony Award–winning actress and legendary star of film and television, and featuring Broadway superstar Chita Rivera, this spectacular one-night-only event will highlight the rich cultural history of American dance and entertainment. Recipients of the 2012 CTFD Awards for Outstanding Contributions to the World of Dance include Joni Berry, Michele Herbert, Gerald M. Appelstein and Arthur Murray International in celebration of their 100th Anniversary. For more stars and surprises, please visit www.careertransition.org

COTTON CLUB PARADE
November 14 – 18, 2012 Tickets on Sale August 13
New York City Center’s acclaimed production of Duke Ellington’s Cotton Club Parade will return to City
Center for seven performances. Conceived by Jack Viertel and presented under the auspices of City Center’s acclaimed Encores! series, Cotton Club Parade will once again be directed and choreographed by Warren Carlyle, with music direction by Jazz at Lincoln Center’s Artistic Director Wynton Marsalis. The show will feature the Jazz at Lincoln Center All Stars under the direction of Daryl Waters. Cotton Club Parade opened at City Center on November 18, 2011 for a limited run and received unanimously rave reviews. It was hailed by The New York Times as “a thrilling 90-minute celebration” and named Best Jazz Moment of 2011 by The Wall Street Journal. Cotton Club Parade is a celebration of Ellington’s years at the famed Harlem nightclub in the 1920s and ‘30s, when the joint was jumping with revues featuring big band swing and blues. As in the original shows, Cotton Club Parade will feature singers, dancers and variety acts, and songs by the greatest jazz composers of the time, including Jimmy McHugh and Dorothy Fields (“I Can’t Give You Anything But Love”), a young Harold Arlen (“Stormy Weather,” “I’ve Got the World on a String,”), and of course, Duke Ellington (“Rockin’ in Rhythm,” “Cotton Club Stomp” and “Creole Love Call”). www.NYCitycenter.org 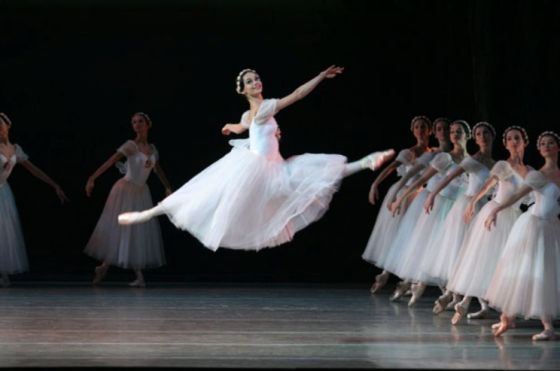 On 28 March Anastasia Kolegova will be performing the role of the Firebird in the eponymous ballet for the first time, Yaroslav Pushkov and Tatiana Tiliguzova will be making their debuts in Chopiniana and Anastasia Zaklinskaya will be appearing as one of the odalisques in Schéhérazade. Perfect in form and visually refined (being created together … Leer más