The annual Mariinsky ballet festival will run for the fifteenth time from 13 – 22 March 2015.

In line with tradition the festival will open with a premiere. The first ballet premiere of the season will be an evening of one-act ballets choreographed by Anton Pimonov – Bambi to music by Andrei Golovin and In the Jungle to music by Alexander Lokshin (13 and 14 March). The festival marathon will continue with performances by lead soloists from the world’s best ballet companies in Mariinsky Theatre productions. This year’s guest stars include Isaac Hernández representing the Dutch National Ballet, Sae Eun Park from the Opéra de Paris and Ruslan Skvortsov from the Bolshoi Theatre.

One of the Mariinsky ballet festival’s traditions is to host galas for the company’s principal dancers. The artistic evening on 19 March will focus on Viktoria Tereshkina. A Mariinsky Theatre prima ballerina and recipient of numerous awards and prizes, she has been appearing in repertoire productions for more than ten years now and practically every Mariinsky Ballet premiere involves her. Adored by the public and critics alike, Viktoria Tereshkina will be performing the roles of Mekhmene-Bahnu in Act I from The Legend of Love, Zobeide in Schéhérazade and the lead in “Paquita” Grand Pas.

Also in line with tradition, one of the festival evenings will see the stage transformed into a space for new dance ideas. On 21 March at the Creative Workshop new ballets will be presented by the young choreographers Vladimir Varnava, Ilya Zhivoi, Xenia Zvereva, Maxim Petrov, Maxim Sevagin and Yuri Smekalov. These young choreographers are being stimulated by a plan conceived by the theatre’s management in line with which the best pieces enter the theatre’s repertoire. Having been performed at previous workshops, Anton Pimonov’s Choreographic Game 3×3 and Yuri Smekalov’s Camera obscura are now in the repertoire, while Vladimir Varnava’s miniature Keep Calm from last year’s festival will be performed as part of the programme for the final gala concert this year. 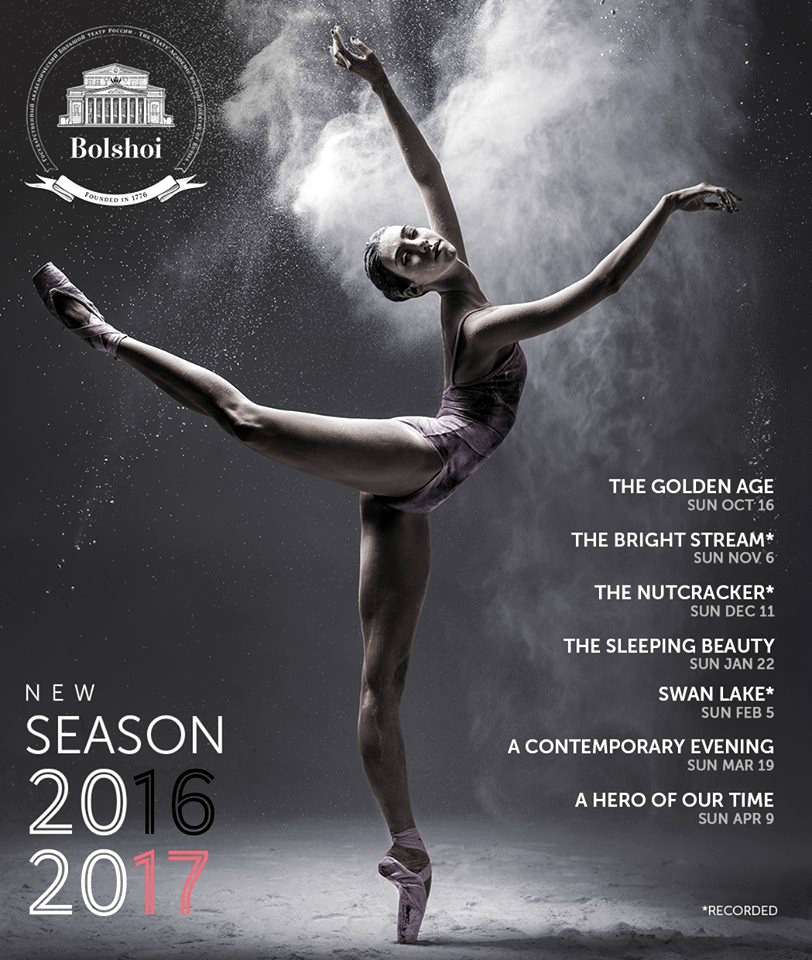 The greatest company in cinemas. For the 7th consecutive year, the Bolshoi Ballet opens its doors to global audiences only in cinemas for a 2016-2017 season boasting impeccable classicism and daring performances. With timeless classics (The Nutcracker, The Sleeping Beauty, Swan Lake), productions signature to the Bolshoi (The Golden Age, The Bright Stream, A Hero … Leer más