On 15 July a performance of Giacomo Puccini’s opera Tosca featuring Maria Guleghina and Vladimir Galouzine brought the XX anniversary Stars of the White Nights International Music Festival to a close. The theatre’s 229th season lasts until 22 July. Over fifty-two days, the festival presented some one hundred performances and concerts which were attended by over one hundred and fifty thousand people.

The Stars of the White Nights festival included the New Horizons festival of contemporary classical music at the Concert Hall and the Jaani Kirik Hall. The festival’s playbill listed works by currently living composers from different generations, among them Kancheli, Raskatov, Dutilleux, Tüür, Knaifel, Silvestrov, Frankstein, Shmurak and Ellin as well as such 20th century classics as Scriabin, Stravinsky and Shostakovich. Alexander Raskatov’s music in particular was highly prominent in the festival’s programmes; there were Russian and world premieres of his works, including Three Angels Sang, a work written specially for the festival. The Americana concert at the Jaani Kirik Hall was an event in itself: five American musicians performed miniatures by Cage, Feldman, Davidovsky and Sessions. On the last day of the festival there was a performance of Boris Tishchenko’s Concerto for Solo Cello, Forty-Eight Celli, Twelve Double-Basses and Percussion which caused a veritable furore.

The symphony music programme of the festival was constructed around the music of Johannes Brahms. The series All of Brahms’ Symphonies and Instrumental Concerti under the baton of Valery Gergiev saw appearances by such acclaimed musicians as pianists Rudolf Buchbinder and Yefim Bronfman, violinists Alyona Bayeva and Pinchas Zukerman and cellist Amanda Forsyth. British intellectual pianist Christian Blackshaw presented St Petersburg audiences with the unique chamber series All Mozart Sonatas.

The Orchestra Filarmonica della Scala gave two concerts at the hall under the baton of Valery Gergiev and Fabio Luisi as part of a tour marking its thirtieth anniversary. 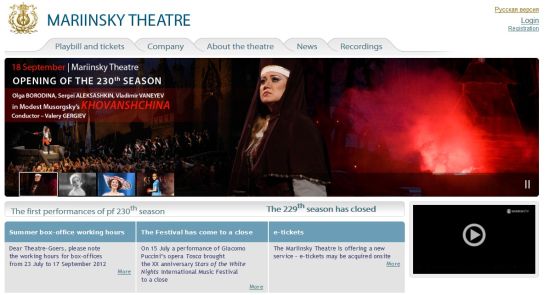