The competitors for the 2012 Joseph Joachim International Violin Competition Hannover‹ have now been selected. Applications were received from 178 young violinists from all over the world – some 38% more than in 2009. This is the highest number in the history of the Competition and demonstrates the degree of international recognition it has achieved since it was first established in 1991.

The Preselection Jury of international experts met in Hannover in closed session from June 26-30 to study the concert DVDs submitted by the applicants, on which they perform the three prescribed pieces. In the end, 39 participants from 21 countries were nominated for the Competition. A detailed list of the selected participants is also posted at www.jjv-hannover.de. The candidates will arrive in Hannover not later than September 28, 2012, in order to be ready to take part in the Competition from September 30 onwards. The Competition is made up of three rounds in five sessions: the two Preliminary Rounds, the two Semifinal sessions and the Final. One particular feature of the Joseph Joachim International Violin Competition Hannover‹ is the fact that in both the Preliminary Rounds and the Semifinals the participants have two opportunities to display their abilities before the jurors make their decision. Among the set pieces for the first session, in which the competitors perform solo works, is a composition by Joseph Joachim (1831-1907), for whom the Competition is named. A further challenge facing the competitors is that of getting to grips with contemporary music: another of the set pieces is a work by the Munich-based composer Peter Francesco Marino specially commissioned for the Competition. In the second session of the Semifinals a new feature of the Competition awaits the competitors: playing with the Munich Chamber Orchestra, they will have to demonstrate that they are also able to lead an ensemble and in doing so put over their own artistic conceptions. All stages of the Competition are open to the public: advance ticket sales have already begun. The award ceremony and the Prize Winners’ Gala Concert are to take place in the Grosser Sendesaal of North German Broadcasting (NDR) in Hannover on Saturday, October 13, 2012. 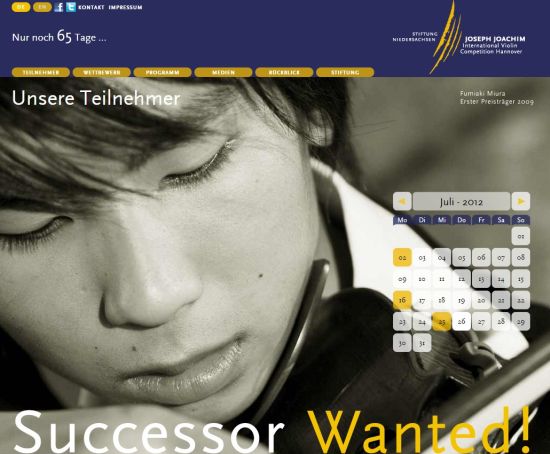